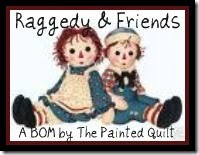 Kaaren is offering a gorgeous "Raggedy & Friends BOM". A free BOM for 10 months.
Along with making this I can see I need to make a "Raggedy Anne" and a "Raggedy Andy" to sit together with the quilt.
So for the 52MMMC - that makes number 11. on the list - Two Raggedy Dolls.
Posted by Susan at 10:12 PM 1 comment:

What am I to do when I see Jenny of ELFANTZ with an interesting challenge last month of making something by re-cycling some used denim jeans? I was given a pair by a visiting missionary family, who were passing through here on deputation, to leave at a second-hand shop (it had gotten some paint on them). So I decided I would use them some how…………..

Then I saw the “Make a Bag sew along” that Kelly's blog had, which I’ve already blogged about. So I decided I would do this fun project………………..

Then a couple of days ago, I saw this challenge, the 52 Marvellous Makes Madness Challenge . The idea is to make, learn or do 52 things in a year. I got thinking about some things I would like to do. So I decided I would have a go with this challenge……………

See where I’m heading too? So many things to make and do, and not getting back to my basket blocks, which I blogged about here, and no further sewing on my Dear Jane triangles!!!!

Anyway some things I’d like to achieve with the 52 Marvellous Makes Madness Challenge in a year.

2. Re-cycled denim jean items – Made a Japanese Knot bag from Helen Heath's Blog, that I’ve wanted to make for a while, and the Gathered Clutch. DONE July 4th and 5th 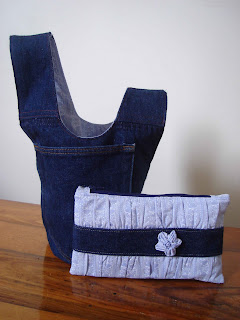 3. Make a Bag Sew Along – 3 accessories made – the tote, toiletries pouch and mini make-up roll. 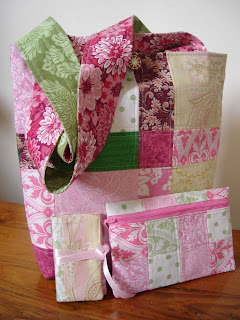 4. Practice machine quilting – I made a table runner last year, using some cupcake fabrics I bought. I made it all, even sandwiched it, but stalled at the quilting. I had intended to machine quilt it all along, but was too scared to start or try…..so today, I thought “That’s it! I’m doing it no matter what!!” I want it finished and on the table I designed it to be used for. STARTED quilting July 5th 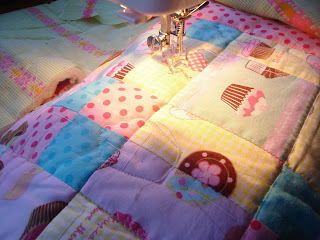 6. Learn Ribbon Embroidery to use in CQ

7. Get a part-time job – after being out of the work-force for 7 years.

9. Get up-to-date with the Basket blocks

I have a year to think of others things I want to make, learn or do for the 52 Marvellous Makes Madness in a year challenge, however, I’ve made or started 9 items in the last few days.
Posted by Susan at 4:56 PM 3 comments:

"Seek ye first the kingdom of God and His righteousness, and all these things shall be added unto you." Matthew 6:33

Susan
Western Australia
I'm a Christian, pastor's wife, mother of two adopted children - from Romania and the Philippines. I enjoy living in the country and on an 8 acre farmlet, set amongst lovely trees. I love any handwork and sewing.